A Brief History of the F and M Track Club

The beginning of the F and M Track Club goes back to early 2008 when Peter Barber and I were training through the winter months for the Boston marathon. I was following the Furman FIRST running schedule that included a weekly Tuesday track workout. We continued track workouts post- Boston that year but not consistently. However, in the months that followed while at the track Peter Barber and I we were joined by fellow Lancaster runners Leo Lutz, Justin Geissinger, and sometime along the way Doug Arndt.

About a year later, after an encounter at the Tucquan club – Jim Sponaugle was given a verbal invitation to join us at the track. Jim was a reluctant member at first – but after many hard track workouts and hitting his first (of many) Boston qualifiers in 2011 – there was never any looking back for him.

Our group continued weekly track workouts at F & M, usually on the track and sometimes doing mile repeats around the perimeter of the campus. In the ensuing years we were joined by two very accomplished (e.g. fast) runners – Greg Cauller and Justin Krebs.

Post-workout at least monthly would end with a walk over to College Row and hang out at the now-extinct “World of Wings” (aka WOW) for $5 buckets of six – 12oz Pabst Blue Ribbon bottles – and if time allowed – we closed the evening with a shot of tequila. While consuming the PBRs we planned, discussed, (and occasionally carried out) “WOW” Action Items – this was a series of goals, aspirations, or ridiculous ideas – all related to running or racing tracked on an excel spreadsheet by Jim. (See “Bucket Award” Photos on this site).

As the years moved on the club has progressively grown by word of mouth and by runners reading F and M race results in our local newspaper’s box scores. New runners continue to the join F and M Track Club looking for a competitive venue, ways to get faster, and forging new relationships.

At the encouragement of Justin Geissinger in 2013 we purchased our first F and M track club singlets and began promoting the club at various races in Lancaster County and soon after throughout the U.S. and at international venues. One of our yearly goals includes motivating our runners to qualify for the Boston Marathon. We also hold an annual “Beer Mile” (see club records page) every July and a Christmas “WOW” club run and party each December.

It was fortuitous meeting at the track the Tuesday before a beer mile rescued the fading careers of post-college runners Otis, Nick, and Zach – who were rumored to be on one last run – then would take up golf.

Currently our roster includes about 100 members although this remains fluid and growing. Many of our runners live in Lancaster City, a significant number live throughout the county but also in the Reading and York areas.

We continue to welcome new members to the F and M Track Club if they want to improve their running speed and ability – but must also be willing to work hard. Our website started in January 2019 under the guidance of Laura Brenner and now includes our club roster, team photos, weekly workouts, and race results.

Want to run with us? Be at the track Tuesday night 6 PM!

Historic “Awards” of the Club 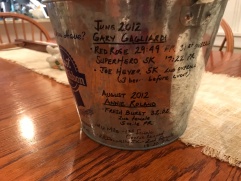 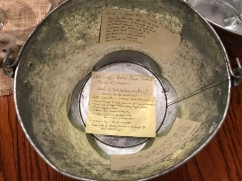 We would give out this branded PBR bucket for racing accomplishments. The 3 names “in the bucket” are for several of our runners, like Greg Cauller and Vicky Boyer, who often raced and won every weekend which made them ineligible for the bucket award. 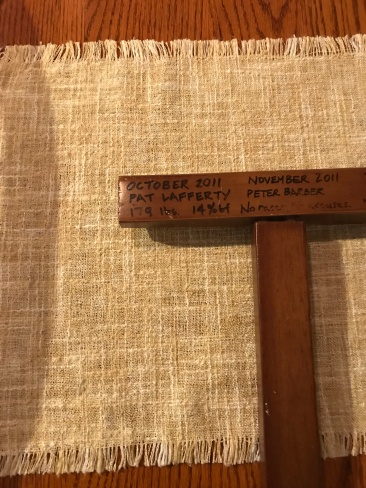 This award was given to the F and M Track Club member who did NOT race during the prior month leading up to our meetings. The wooden leg is from a chair at our meeting location, World of Wings, and was accidentally broken by a former club member. World of Wings graciously allowed us to keep the leg, creating the award.